Croquet is played in Ramsgate on the Westcliff, in pleasant surroundings overlooking the sea. The Club was founded in 1983 at the Montefiore sports ground, where it had two lawns and shared a pavilion with the Bowls Club.

In 1987 it moved to its present site on the Westcliff. Here there are four very good lawns and a pavilion which has been greatly improved by the efforts of the Club members. 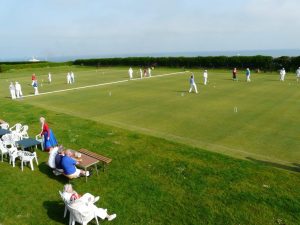 Croquet is a great sport, and our club provides an environment to enjoy it both socially and competitively. For new members, we offer all the equipment, coaching, and playing facilities you’ll need to get going.

For more experienced players we offer the chance to play competitively, both at home, representing the club against others or in open competitions at clubs around the country. 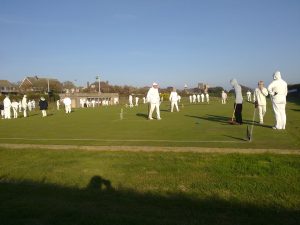 Read more about and where we play and the history of the club.

The club is a member club of the Croquet Association (CA), which is the governing body for croquet throughout England and Wales.

The CA is the national governing body for the sport of Croquet (including both Association Croquet and Golf Croquet in England, and is responsible for promoting and regulating the game in that area.

In conjunction with the Regional Federations and its Member Clubs, it supports croquet at all levels, from games played in the garden and local play at clubs, through to regional and national tournaments and international matches. It runs an online shop, from its headquarters in Cheltenham, where both its members and the public can purchase books and equipment, with the benefit of advice if needed.

The CA is a not for profit organisation1, funded through club and tournament levies, individual subscriptions, and donations; most of its accomplishments are through voluntary effort. It works in aspects of the game that need national coordination.

Ramsgate Croquet Club is also a member of the South East Croquet Federation which coordinates clubs in the region, and organises leagues, development and coaching throughout South East England and the Isle of White.